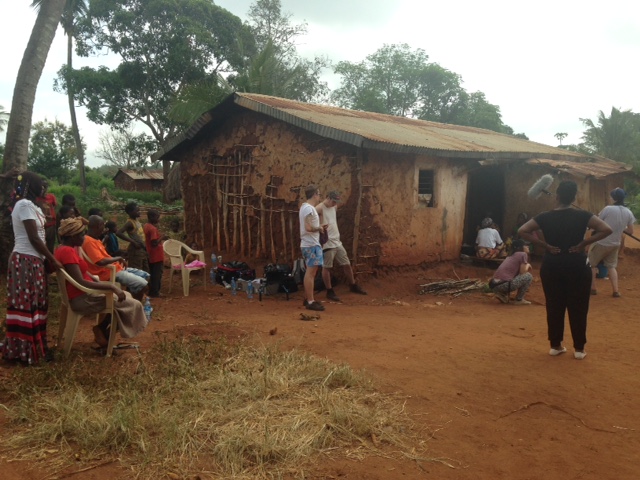 In times of uncertainty and insecurity I like to think of a man the PILI crew call Mr Karibu. Mr Karibu is the elder of the family whose homes we used as the location of Pili’s house in Pwani. Mr Karibu got his nickname because of his use of ‘karibu’ which means welcome/you’re welcome/no problem in Swahili in response to every question or request we put to him. His use of karibu was less of a ‘yeah, yeah, please just leave me in peace’ but more of an openness to help us in the production of the film. From the outset he was super supportive in doing what was necessary to help us make the film. I would have a chat with him every morning as he headed off to work on his bike, let him know what we were up to, see if there were any issues or problems he would want to discuss with me, and everytime I got the same ‘karibu’ response. He would then say ‘karibuni’ to the cast and crew before cycling to work.

It was a short time into the shoot when I learnt that DOP Craig had given this man the nickname Mr Karibu. However, as the conversation developed over the loveliness of Mr Karibu I realised Craig was talking about a different man in the family, another Mr Karibu. Another man who had gone out of his way to help with the film by fixing the new door, finding fire spare fire wood, and generally being cool with a film crew turning up and using his home as a set. Like my Mr Karibu, he responded to every question of comment with ‘karibu.’ The more I looked around this small community, the more I realised there were Mr and Mrs Karibus everywhere: the Mrs Karibu who gave us porridge to cook, the Mr Karibu who burnt a tire to create smoke (very bad for the environment, safety and your health by the way but he had done it before I could stop him and looked really impressed by the smoke he created), and the Mrs Karibu who put baby Charles on her back when Sikijua and I couldn’t console him.

These Mr and Mrs Karibus encompassed harambee, a Swahili word traditionally used in East Africa to encompass togetherness, community, mutual support and assistance. The word can also be used to refer to a particular event of collective purpose or charity. Like any well meaning word its use has been politicised in some parts of the region; hijacked for political ends, used as a government slogan, or served as justification for the use of free labour by the people in under funded public services. However the main spirit of the word lives on in communities, families and people such as the Mr and Mrs Karibus.

Some days it is useful to think about communities who see togetherness as mutual endeavour or just how life is. Today I am thinking about Mr Karibu and the spirit of harambee.

One thought on “Mr Karibu and Harambee”