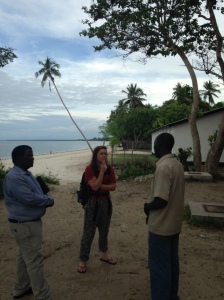 The Tanzania College of Arts was established in Bagamoyo 1981 as a centre of excellence to promote drama, music and dance in Tanzania. Never to overlook a portentous sign, 1981 was also the year I was born so I decided this must be love before I even entered the main building. Renamed TaSUBa after the main theatre was rebuilt following a tragic fire, the College of Arts as you would imagine is a hotbed of talent.

Main theatre rebuilt after the fire

Director Leanne and I visited the College today with Nkwabi – one of the founding teachers at the college, a mime extroadinaire, now retired – and Charles of the People’s Health Initiative in Bagamoyo. We were there to see what potential talent and expertise we could recruit to be a part of our film crew and assess potential locations for the main filming next year. What we discovered was a real gem. On the outside stage students were preparing for their main drama assessment; inside the main theatre a tutor ran through the final assessment criteria with his class; and in every free space students were rehearsing their final performances. Nkwabi treated us to the full tour backstage, the recording studio, and the editing suite. We walked out of backstage only to be halted by the acrobats vaulting down the stairs with stupefying athleticism.

As we proceeded with Nkwabi’s tour you could sense that Leanne and I’s antennae were in overdrive. So much talent and potential to include in the film! We could have an original score based on the bongo flava and classic compositions of the students, we could stage a social scene in the outside space, and we could use the brilliantly (and obviously) named ‘Flexible Hall’ as a workshop area. The possibilities would be endless! The Principal Instructor of the College, Mr Kiiza, responsible for academic affairs and teaching, offered us a warm welcome and confirmed that the college was brimming with potential talent that may be willing to work with us. 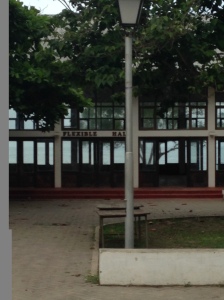 After a tiresome week of red tape last week, the trip to TaSUBa was incredibly refreshing. We’re hoping to sit in on some of the final examination performances if possible, and will definitely be soliciting compositions to buy for the film soundtrack. I also fully intend to offer up Leanne’s services to give a joint tutorial on editing and direction in film. Clearly they have no use for me, the arts have no time for politics and international relations, apart from to discuss the new President Magafuli (everyone seems hopeful – he’s banned unnecessary foreign trips, has walked into public hospitals and asked uncomfortable questions, the other day he WALKED from state house to the Ministry of Finance on the other side of the road (previous Presidents never walked)). I now see my role as principally concerned with how to get an acrobatic troupe into a film about women and the everyday risk of HIV/AIDS.