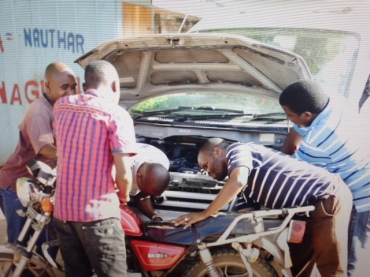 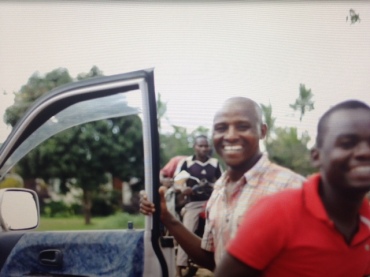 In an intense working environment it is always good to have some light relief. Light relief on our preparatory trip to Tanzania came in the small but perfect package of our driver Jackson Kilo and his battered and breakdown-prone Toyota Noah.

Jackson likes: Congolese songs that last a minimum of 20 minutes (often then repeated); short cuts that often damage the Noah but allow him to wave at his mates; cold coke; staring and wagging his finger at accidents; beeping at cows; beeping at people who overtake him; pineapple; and, of course, Arsenal. Jackson does not like: cows, goats or monkeys in the road; having to stay with the car and missing out on the action; negotiating with me about how much petrol we need each day; and slowing down for speed bumps.

Jackson speaks little English but it turns out this is no barrier to communication. He called me at 6.20am for a 7am pick-up to announce ‘Kilo delivers!’ When the AC covered Director Leanne and Translator Ansity in dust he proudly declared ‘Vumbi!’ as explanation as to why the AC hadn’t been working all week. He regularly shouted ‘Sofia!’ at random intervals of a journey often for no reason, often to see if I could sort permanent employment for him.

At the end of a particularly long day he read our faces and suggested we have fun by driving through the forest instead of the main road. His ultimate good time suggestion was taking Translator Charles, Director Leanne and I to the Miono snake park (really someone’s homestead with some wooden boxes, but still amazing!) to meet the local snake whisperer and his python, cobra and black mamba. The whole team are now investing in wellies for the main shoot.

Jackson doesn’t get cross when the Noah doesn’t start or when he ploughs into a dip in front of everyone waiting to be seen at the Care and Treatment Centre. He just finds the nearest motorbike to get it going. He doesn’t get cross when we stage a heated debate in order to avoid a repeat of the same Congolese anthem for the fourth time.

For all of these reasons I want to work with Jackson on the main shoot in February/March. We’re negotiating a price, but we need him, as in the words of the great man himself, ‘Kilo delivers!’