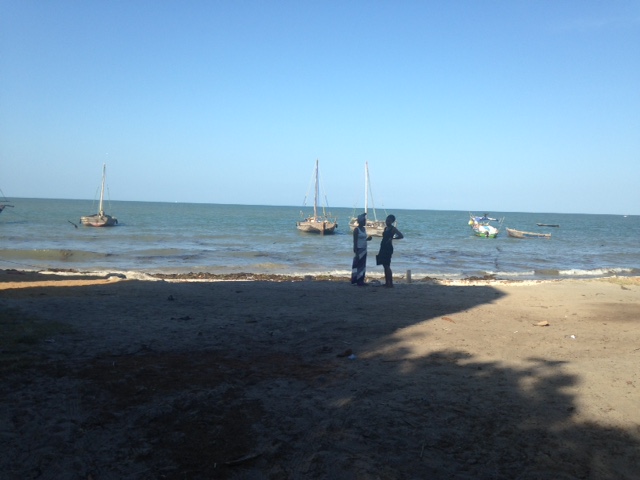 My whatsapp started pinging early this morning with messages from Jackson posing in pictures with two of the women in the film (Jackson was in the centre, of course). Having been back in the UK a month it was good to see them. However what I really wanted was an update on how everyone was getting on. When we left Pwani the rains were approaching and many of the actors in the film were worried about a leaky roof, school uniforms and food.

A real worry when making the film was managing the expectations of the actors/research participants in university parlance (I’ve been writing about film as research method all day so not sure how to classify the women any more, my brain as DOP Craig would say, is properly puddled). Participants could expect payment for their involvement in the filming (not too much, not too little, but enough to compensate for any lost earnings) and could expect any money made from the film to go back to the communities where the film was shot. However these impacts are both immediate and long term. In the short term, nothing changes for the women as a result of participating in this film project. I go back to my university office, Leanne goes to Kant’s house for the edit (more on this coming up!), Ansity is planning her wedding next months, Anitha just got engaged: the women in Pwani go back to work in the fields.

As the producer/principal investigator (still puddled by the academic/film producer thing today), I have a responsibility to the women involved in the film in the short and long term. During my last day in Miono I carefully outlined to the group at the wrap party what would happen next for them with regard to the project. I then sat with whoever wanted to talk to me individually (turns out quite a few people) to go over this or any concerns they had.

The long term plan is clear. Return to Tanzania in the autumn to show the film, see how everyone is, and discuss future plans for screening the film to wider audiences around the world. However at this point I won’t be returning with any money – hopefully we’ll have or be on our way to a distribution deal, but the film most likely won’t have generated any profit. The grand plan is to screen the film at a festival and get a theatrical release (of course this is everyone’s plan, but dream big!). I’ll set up a ‘Pili’ fund to be managed by a committee of women – ½ actors in the film; ½ non actors to avoid any accusation of bias – who will then decide how to spend the money in the areas the film addresses – HIV/AIDS, health, livelihoods. The committee will be like the Vikoba group you see in the film but the difference is the money will be a grant not a loan. My only involvement will be to look over the accounts every quarter, get a good deal to make some money, and make sure that money then reaches the fund.

Besides the money we also have a duty of care to the opportunities and potential exploitation the actresses may face, particularly the lead actress, Bello. Once you see the film you’ll agree that Bello has great talent. Directors and producers will want to work with her. Leanne and I will in effect have to act as her agent, presenting her with all proposals we receive but also helping her find guidance as to whether such proposals are legit or fair. We’ll tell her if anyone contacts us about her and hopefully she’ll do the same. However, this, of course, depends on Bello wanting to act again: what Bello really wants to do is become a nurse. She wants to show that people from her background can reach such a profession. I said we would help her by linking her to local health professionals who can act as mentors and support her going back to school while balancing family demands. I’ve asked her to look into where is best to go to school, what level she needs to enter, and when she could start. I want to continue this conversation in the autumn.

Of course this is all well and good for the long term, but what about now? Leanne and I have now known these women and worked with them for six months. Their lives have not changed. I get the same whatsapp pics from Jackson but no-one tells me if Sikijua’s roof is fixed, if Bello received the phone I left for her in a Dar hotel, or if the western union transfer worked. These women have clear structures of how to contact me directly or reach out for help – they all have my number and know who in Pwani and in Dar they can contact to reach me. In a way, no news is good news, I’ve just got to concentrate on delivering on the long term and getting a deal to make them some money.